Kyrie Irving 'being true' to himself by not getting vaccinated 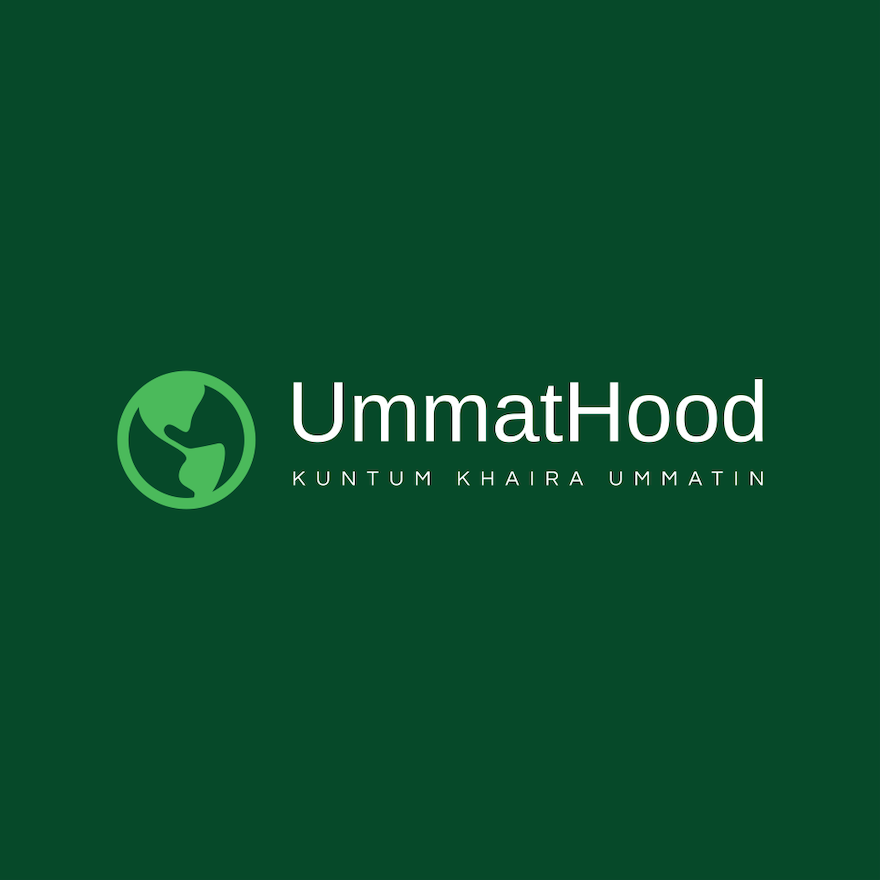 Sahaba learned deen through companionship and Service (Suhabat o Khidmat) Temporary Migration and Travel for seeking Knowledge and struggling for deen. Jihad internally and externally for ones self and others for deen (Ilm and deen ke liye Safar o Hijrat. However, one should note the desire to be a martyer (Shaheed) and partake in Juhad fiddeen is of the highest caliber! 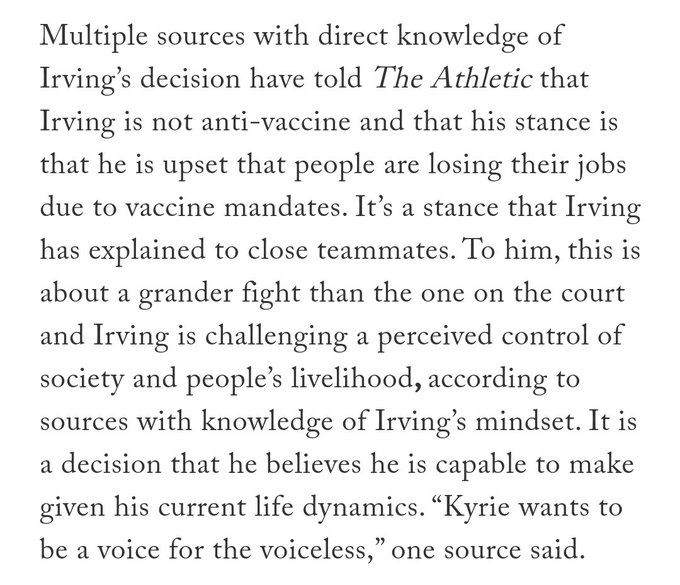 Kyrie Irving said he was "being true to what feels good" by choosing not to get vaccinated after the Brooklyn Nets decided he will not be allowed to practice or play with them until he complies with New York City's coronavirus vaccine mandate.

A New York mandate requires proof of at least one shot of the vaccine to enter large indoor spaces. The NBA has said players who are unable to compete due to local mandates will miss out on pay.

"It is not about being anti-vax or about being on one side or the other. It is just really about being true to what feels good for me," ESPN quoted the Nets guard as saying on Instagram Live on Wednesday, October 13.

'If I am going to be demonized for having more questions and taking my time to make a decision with my life, that is just what it is,' says Nets star Kyrie Irving as he remains unvaccinated

"The financial consequences, I know I do not want to even do that. But it is the reality that in order to be in New York City, in order to be on a team, I have to be vaccinated. I chose to be unvaccinated and that was my choice and I would ask you all to just respect that choice."

NOW WITH THAT SAID, PLEASE ALLOW ME TO TIE THIS ALL TOGETHER, I GIVE YOU JUST A FEW OF THE MOST TRUTHFUL WORDS EVER STATED BY NONE OTHER THEN ALLAH RABUL IZAAT AND RASULULAH HIMSELF TO ENCOURAGE ONE OF THE BIGGEST AND MOST COURAGEOUS JIHADS OF OUR TIME: SPEAKING THE TRUTH IN THE FACE OF TYRANNY AND OPPRESSION! - CLOSE AND MEANING TO THE EFFECT.

Everyone shall taste death. And only on the Day of Resurrection shall you be paid your wages in full. And whoever is removed away from the Fire and admitted to Paradise, he indeed is successful. The life of this world is only the enjoyment of deception (a deceiving thing).” [Surah Aal-‘Imran, 185].

And last but not least please don't ever forget your history, our history, the worlds history. Your smart enough to not call everything a conspiracy, we are believers not kaafirs who get lost in the mystery. They are so secretive and full of conjecture its ridiculous.

Are We Allowed to Talk About Anything of Importance, Anymore?

The short answer is “no”.

We can no longer ask questions or state our opinions online without being demonetized, deplatformed or banned. The list of “forbidden subjects” is long, and it is growing longer by the day:

there is no such thing as the illuminati, (nobody plans the abolition of all governments, all religions, inheritance, private property, etc.)

in fact, the very notion that powerful people conspire to remain in power and accumulate more wealth is absurd

Bill Gates, the Rockefellers, and other “elite” families don’t want to depopulate the world

fluoride in drinking water is good for health

organic food is a lie

supplements are a scam

big pharma wants to cure diseases, even if that means losing money

the recent cancer epidemic is not engineered, and it is mostly driven by genetics

vaccines are completely safe and are not engineered to give cancer

the Western world is overpopulated, but we need to import migrants from 3rd world countries because of the sub-replacement fertility

there is no such thing as chemtrails, and this NASA scientist never said they exist

chemtrails exist, but are necessary to cool off the world

global cooling was a major issue in the 1980’s and it should have destroyed the world in 10 years, but you can forget about it now

global warming was a major issue in the 2000’s and it should have destroyed the world in 10 years, but you can forget about it now

there is no such thing as geoengineering

CO2 is causing for global warming and is going to destroy the world in 10 years, even though it doesn’t rise up, trap and retain heat

humans are to blame for global cooling, global warming and climate change

cows are also to blame for global warming and climate change

over 30,000 scientists have signed a paper disproving global warming, including climate scientists, but the science is settled and you should ignore them all — every. single. one. of them!

500 climate scientists and professionals have recently signed a letter to the UN, stating that: ‘There Is No Climate Emergency’ — but you should ignore them as well. Instead, you should listen to Greta Thunberg.

the “Milankovitch Climate Theory” which explains that the biggest factor influencing weather and climate patterns on Earth is the sun, should be ignored

the government wants you to live a long and fulfilling life, even if that means paying you a pension for many years

wars are necessary and there is nobody profiting from them

secret societies are benevolent and work hard to uplift mankind

the government is your friend and wants the best for you

the fact that politicians are millionaires is of no concern either

ancient history should be removed from schools or re-written, in order not to offend migrants

the Protocols of the Elders of Zion are fake

Albert Pike’s letter to Mazzini, which outlined the exact plans for three world wars that were seen as necessary to bring about the One World Order, was fake as well

history happened exactly as it is written in our history books

Hitler was not financed by the Federal Reserve, Prescott Bush and the other “elite” families

Hitler didn’t escape to Argentina where he lived on a farm with his wife until he died of old age. The FBI and the CIA didn’t have any information of his whereabouts after WW2. These recently declassified documents don’t exist.

If Liberty Means Anything At All, It Means The Right To Tell People What They Do Not Want To Hear

“If liberty means anything at all, it means the right to tell people what they do not want to hear” – George Orwell

all ancient accounts that describe extraterrestrial contact are part of mythology (basically our ancestors from all over the world, suddenly decided to invent stuff and combine their real history with the made up stuff for no apparent reason)

all megalithic structures, pyramids and monuments have been built by half-naked people with copper tools, before inventing the wheel or advanced mathematics

the fact that on almost all continents we find pyramids, megalithic monuments, mummies, and similar or identical stories speaking of “gods” who descended from the heavens to create mankind, is a coincidence

the Federal Reserve is good for the economy

the families that own or control the Federal Reserve, the World Bank, the IMF, as well as all major banking conglomerates, have less money than Mark Zuckerberg

the bankers that are in charge of creating money out of thin air for centuries, and then lend the money at an interest to countries, have less money than Mark Zuckerberg

royal families, who have been in power for centuries or even millennia, have less money than Mark Zuckerberg as well

you shouldn’t be worried that just 4 mega corporations own most of the world’s wealth (you shouldn’t be curious who are the shareholders that take home the profits, and how it is possible that someone like Mark Zuckerberg is wealthier than they are)

you shouldn’t be worried that only 6 corporations control almost everything that you watch, hear or read

Agenda 2030 is about helping people, and not enslaving the world

there is no such thing as black budgets

black budgets exist but the people don’t have the right to know what they are, even though it costs them billions per year

NASA has used what is basically a “tin can” with millions of times less computing power than your smartphone, to take astronauts all the way to the Moon. They safely navigated through the deadly Van Allen belts twice, being shielded by a few millimeters thin aluminum foil, then navigated the “tin can” all the way to the moon and back. We can no longer go back to the Moon because NASA has lost all of the schematics, the data and the original footage for what is mankind’s greatest endeavor.

illegal migrants are good and welcome, even though most are virtually illiterate, disease-ridden, mostly male, don’t want to work or integrate into the new culture, and are a heavy burden to the taxpayers

children should be kept in school for as much as possible, where they should not be allowed to play and have fun

children should receive as much homework as possible, so that they don’t have time to play at home either

teaching children in school about family, purpose, spirituality, kindness, empathy, health and preventing disease, love, money, moral values, is not important to them or the society

teaching children that there is no such thing as male and female, and that choosing your own gender or not identifying with any gender at all, is also normal and progressive

pedophilia is a normal sexual orientation, and this should be taught in schools, all over the USA, as well as presented as scientific fact by TEDx, in two separate occasions

there is no such thing as “elite” pedophiles and child trafficking

paying adult men dressed in women’s clothes to read stories to young children (such as “what color is your underwear“), flash them their crotch, lay on the floor with children on top of them is part of education, even if some of them have been discovered to be convicted pedophiles or currently work as strippers in night clubs, and even after admitting they are “grooming ” children

parents don’t know what’s best for their children, and “shouldn’t have final say” — the teachers and the government should, because the state owns their children

changing the sex of very young children, some aged ten, others aged eight, five and some as young as 3, is normal and progressive

the fact that serial pedophiles get lighter sentences (or don’t go to prison at all) than non-violent people who smoke a plant because it alleviates pain or use it to treat their own diseases, is normal

the government can decide if you are allowed to use a plant that grows naturally on Earth, and can put you in jail for decades if you don’t obey their decision

abortion (which is the leading cause of death for black people, if we consider babies in the womb to be alive), including in the last month, is a normal and progressive and private organizations spending huge amounts of money to promote and lobby for killing babies in the womb is normal for the 21st century

if someone feels offended by a statement, even if the statement is true and/or scientifically correct, it is now considered a “hate crime” and that person’s account can be banned from social media, and the police can fine that person in real life

Questioning any of the above statements is no longer tolerated by the powers that shouldn’t be.

“I do not agree with what you have to say, but I’ll defend to the death your right to say it” – Voltaire

What Can We Talk About Without Fear Of Repercussion?

We can still talk about irrelevant “celebrities” and petty gossip, consumerism, politics (but only as long as we keep it extremely simple: left vs right), sports (i.e. circus), movies, music… and that’s about it. Everything else, everything of importance, is currently under quarantine, and about to be banned.